6 U.S. Women’s Open storylines to know for Monday’s final round 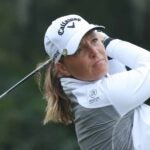 The U.S. Women’s Open is setting up for a thrilling Monday finish.

Sunday at the U.S. Women’s Open left us without a winner, but not for any fault of the leaderboard. Shortly after final-round play began, it ended thanks to a series of storms that dumped rain onto Champions Golf Club and made course conditions untenable.

Here are six storylines to keep your eyes out for when play resumes at 9 a.m. ET on Monday in Houston.

All of our market picks are independently selected and curated by the editorial team. If you buy a linked product, GOLF.COM may earn a fee. Pricing may vary.

1. Could the delay be ruinous?

Of all the people affected by Sunday’s postponement, Shibuno might be the most irked, and for good reason. The 22-year-old holds a one-stroke lead, and now has another day to grapple with the emotions of contending for her first major. She already slept on the 54-hole lead once, and now she’ll have Sunday to do it again.

2. Could the delay be…a good thing?

You heard the frustration from the golf community when inclement weather led to a replay-filled second-round broadcast. This week, after all, was supposed to be about #WomenWorthWatching, the hashtag created for the event. The Women’s Open represented a massive opportunity for the sport from an entertainment standpoint. This week was women’s golf’s opportunity to air one of its major championships in golf’s center stage with no distractions from the men’s game. In theory, that should help viewership, exposure, and interest. But as the men’s game has learned oh-so-well over the last several months, it’s hard to distract attention away from the NFL.

On Sunday, the NFL left the Women’s Open fighting for a smaller share of the ratings pie. But on Monday, with no other major sporting events until Monday Night Football, the airwaves are wide open. Could this help bolster viewership? We won’t know until Tuesday, but it’s not hard to see how Sunday’s showers could spring flowery ratings for this year’s broadcast. Coverage begins at 9 a.m. ET on Golf Channel.

What’s a national championship without some good-natured argument about course conditions? This year’s Women’s Open is no different.

Players were fired up coming off the course on Saturday, largely due to soggy, muddy conditions (the USGA decided not to adopt lift-and-replace rules). It led to mudballs, and lots of ’em.

After rains made reservoirs out of the fairways at Champions Golf Club on Sunday, could we see more of the same on Monday?

A 22-year-old college senior from Austin, Texas, is in contention heading into Monday at the national championship. Kaitlyn Papp has launched herself into the heart of the Women’s Open conversation, and she hasn’t even turned pro. Not half bad for a week in Houston.

Papp, an amateur from the University of Texas, isn’t just the frontrunner to win low-amateur honors, she’s four strokes back of the lead (and one of only nine golfers at even par or better).

Of those nine golfers at even par or better, two of them share the same DNA. 2018 Women’s Open champ Ariya Jutanugarn (E) and her sister Moriya (-1) are each in contention heading into the final 18 holes. Ariya is in the hunt for her third major championship while the elder of the two sisters, Moriya, is looking for just her second professional win.

Amy Olson is tied for second heading into Monday looking not just for her first major championship victory, but for her first professional victory. The Oxbow, N.D., native is the best-positioned American to make a run at a U.S. Open on Monday, just one stroke back of the lead at three under.

But while she hasn’t found the winner’s circle often in her professional career, she’s no stranger to big moments. Olson topped Juli Inkster’s record for college victories while she was a student at North Dakota State, and racked up a second-place finish at the ANA Inspiration in 2018. A breakthrough on the national stage to become the first American in four years to win the Women’s Open would be fitting theatre.