Rong Fu Vies for Her Man in “My Fake Boyfriend”

Rong Fu relishes connecting with an audience. “What I enjoy the most about performing is telling stories. Being able to take an audience on a journey and arrive at some kind of new understanding or connection is one of the most satisfying things about the job.” It’s even better if this bond can be forged through comedy! “There’s so much freedom in comedy! I love comedy because it’s tragedy, just faster. As a performer I get to explore the more extreme sides of the human experience, while keeping the character grounded and believable. It’s a fun challenge, and I just love making people laugh.” You can currently catch Rong as Jessica in Amazon Prime’s new romcom, My Fake Boyfriend. “My Fake Boyfriend follows the story of Andrew, played by Keiynan Lonsdale, who is in a tricky situation when he follows the advice of his unconventional best friend (Dylan Sprouse) and uses social media to create a fake boyfriend to keep his awful ex-lover out of his life. But everything backfires when he meets the real love of his life, and breaking up with his fake boyfriend proves hard to do. I play Jessica who is a very passionate woman and won’t take no for an answer! In My Fake Boyfriend, she is in the same cooking class as Andrew and soon realizes they both have eyes for their hot teacher, Rafi. In the film, Jessica does whatever she can to mark her territory and win Rafi’s heart.” Rong has never used social media to send signals to an ex, but she does have an Instagram dedicated to a great love. “I’m not very active on social media because I find it to be an unhealthy distraction for me. However, I do have a secret Instagram account where I only follow restaurants and chefs because I’m a huge foodie. More importantly, I just need to know if my favourite restaurants have specials or new menu items!” 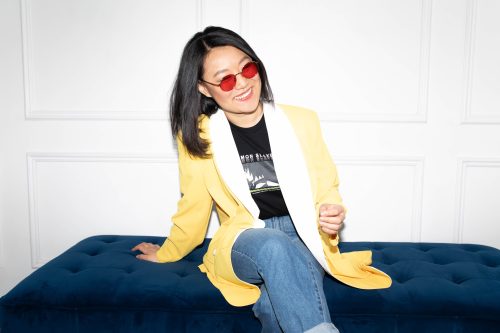 Jessica’s infatuation with Rafi is easy to understand. “Have you seen Rafi? He’s gorgeous, sensitive, and an amazing chef. I think for Jessica (and myself), he’s the whole package!” Unfortunately for her, it doesn’t take long for her to sense his spark with someone else. “I think Jesscia would be threatened by anyone who dares to look at ‘her man.’ But truthfully, she’s probably threatened by Andrew because she senses a real connection between him and Rafi.” In real life, Rong is much less forward when it comes to romance. “My instinct whenever I’m near a romantic interest is… to hide. I am incredibly shy when it comes to people that I have a crush on. I’ll admit, I’m a coward. I wish I had Jessica’s boldness to go after her romantic interests.” With that said, she does have a go to meal in mind to impress a crush! “Red Braised Pork Belly, it’s a little time consuming and it is my favourite childhood dish. I think the combination of effort and significance perfectly showcases my earnestness to the person I like.” They say the way to someone’s heart is through their stomach, so Rong is obviously smoother than she thinks! My Fake Boyfriend premieres on Amazon Prime on June 17th.